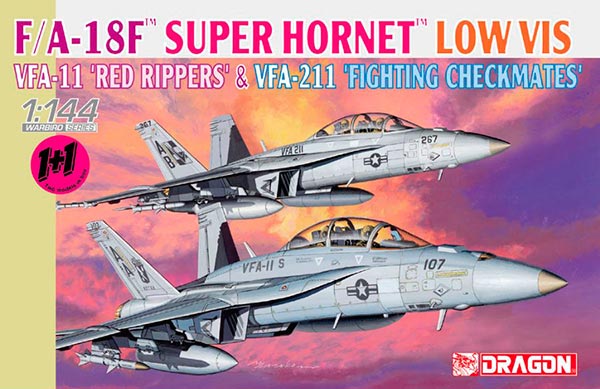 Escala: 1/144 Comprimento: Envergadura: Número de peças: Dragon’s newest 1/144 scale twin-pack features a pair of F/A-18F Super Hornets from U.S. Navy units. The Super Hornet entered service in 1999 and has progressively replaced the F-14 Tomcat. Dragon’s models are beautifully sculpted, with refined and accurate detail for these twin-seat variants of the F/A-18. The two units represented in this twin-pack are VFA-11 and VFA-211. The former is also known as “Red Rippers”, and is based at NAS Oceana. It began transitioning to the Super Hornet in November 2004. VFA-211, “Fighting Checkmates”, is also based at NAS Oceana and was the first operational Super Hornet squadron on the East Coast of the USA. Markings for these two units are provided by sharply registered decals produced by Cartograf. For modelers seeking sleek and potent fighter/attack aircraft to add to their collections, these two models representing units of the Atlantic fleet are the ideal solution.