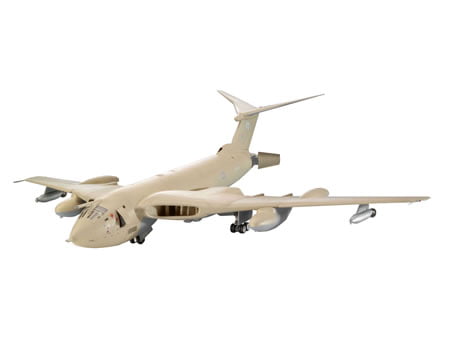 Sobre o original: Originally developed to carry nuclear and conventional weapons at subsonic speeds and high altitudes, the Handley Page Victor was part of the RAF V bomber fleet until 1968. For a very long time it was assigned a tanker role with active service in 2 wars. In-flight refuelling played a prominent part in RAF Tornado operations in the Gulf Warin 1991. The Victor K Mk 2 tankers were vital for refuelling the Tornadoes and filled the desert air with their swan song. Designed as a strategic bomber to RAF specifications, the prototype first flew in 1952 and went into production for RAF Bomber Command in 1956. With larger and more powerful engines the B2 version was capable of carrying up to 15 tons of nuclear or conventional bombs. From 1965 it was converted to a refuelling tanker. The wing, fuselage and bomb bay tanks have a total capacity of 57,607 kg of fuel. Power plant: four Rolls Royce Conway 201 turbofans each with 9,344 kp thrust. Speed: 1,040 km/h at an altitude of 12,190 m. 6 man crew.