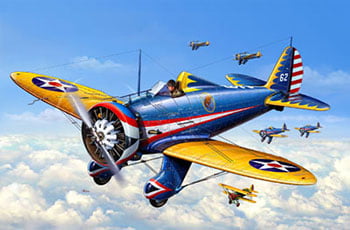 Kit para montar - P-26A Peashooter - 1/72 Escala: 1/72 Número de peças: 23 Comprimento: 102mm Largura/Envergadura: 117mm Altura: Opções de decalques: - USAAC Version Sobre o original: There is probably no other aircraft in civil or military aviation that is The P-26A "Peashooter" was the last aircraft in the USAAC to have an open cockpit and a fixed undercarriage. Up to 1938 it was the fastest American fighter. It was already outdated when it entered service in 1934 and was decommissioned in 1941.